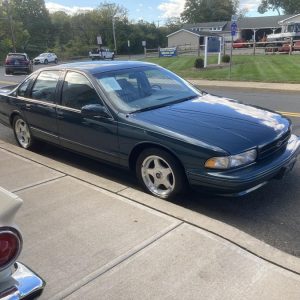 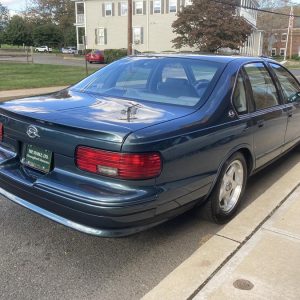 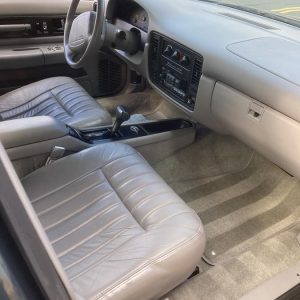 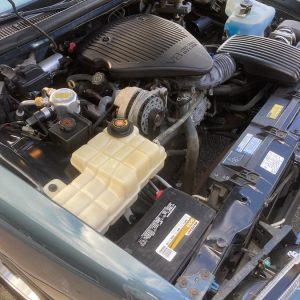 1996 CHEVROLET IMPALA “SS” SEDAN #1G1BL52P2TR127090. (Stock #4184.) To compensate for some unremarkable performance evident in their 1970’s, 1980’s and early 1990’s cars,  General Motors built some interesting , and very quick, variations of  their 4-door sedans. With Buick,GM built the “Grand National” and with Chevrolet, they built the “Impala SS.” Introduced in 1994, the Impala “SS” was based upon the Police Package Caprice sedan.  Which included advanced  design elements such as stronger ABS  braking with 4-wheel power discs, a better cooling system,   sport suspension, enhanced precise steering, dual exhaust, limited slip differential, etc. . This Police platform was a natural base for the high performance “SS.” Using the Corvette “LT-1” engine, the “SS” had many performance touches built-in as well as some luxury touches seen only on that car.  The very comfortable front sport bucket seats are surrounded  by a soft leather interior with “SS”  embossed on each headrest. Front cornering lamps are built in to the headlights, a subtle rear spoiler is present on the rear deck lid, front and rear reading lamps are  present,as is a tilt steering wheel, twin electric fold-away outside rear view mirrors, special 17``alloy wheels (our car is still wearing  its original BF Goodrich “COMP  ZR” speed-rated blackwall tires)  which were designed specifically for the “SS,” stainless steel dual exhaust system, climate control, cruise control, power seat, locks, windows antenna and mirrors and even cup holders.  A floor-shift automatic transmission was installed on the last year of production models, replacing the column shift on the 1994 and 1995 models and  digital gauges from the first two years of production were replaced by analog gauges—including a tachometer—on the 1996 cars. The car is noted for its quick and precise steering which, along with the sport suspension and the 4-wheel power disc brakes with a Bosch ABS system, account for a most entertaining  driving experience. Our car was purchased new from Connor Chevrolet in March, 1996  by a local (Watchung) woman who meticulously cared for the car,  saved  the original window sticker and  manuals and never unwrapped  the  optional stereo earphones and remote.   She only infrequently removed the car from its heated garage, driving the car just 15,151 miles in her 25 years of ownership. She ordered the car in beautiful grey-green with light grey leather—another item available only on the 1996 models.  The earlier “SS” cars were originally available only in black while dark red and this beautiful green were offered on 1996’s. There has never been any damage or paintwork to the car and  it is very close to original showroom condition inside, outside, underneath and mechanically.  Just serviced by us.  15,131 miles.   SOLD!